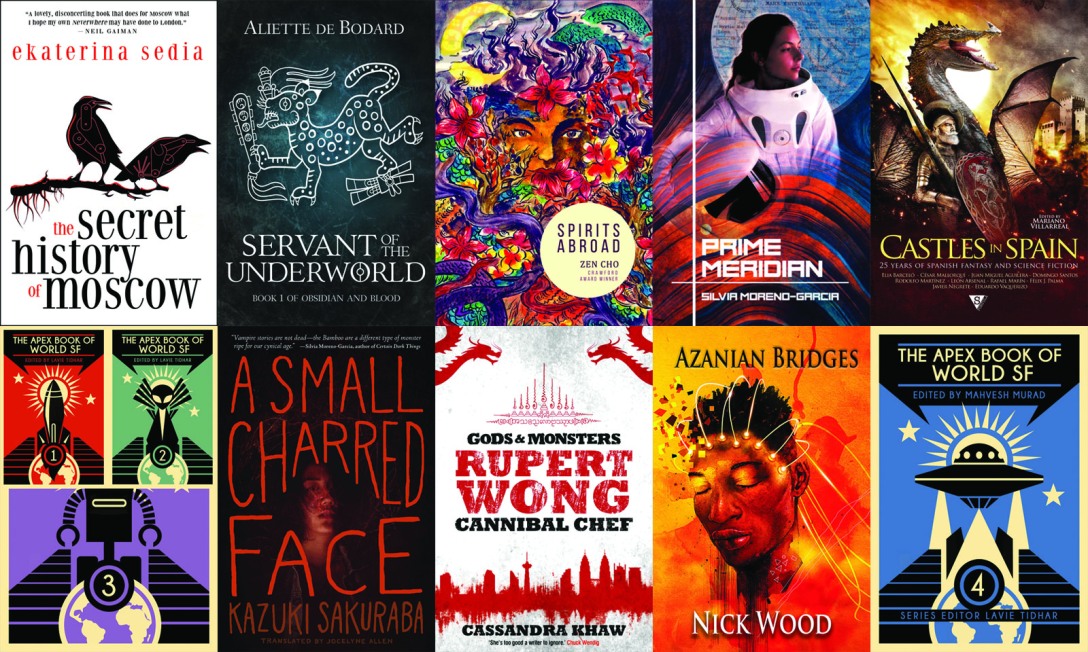 Okay, here’s a deal you might want to take a gander at. It’s a deal I have a special interest in.

You see, I was in a rather smashing book once. Well, a tiny story of mine was in the rather illustrious Apex Book of World SF 4, and now that collection is part of a SciFi StoryBundle.

The idea of a StoryBundle is that you get a bunch of great books in a bundle at a pay-what-you-want kind of deal. Pay more than a set amount, and you get bonus books.

The initial titles in the World SF Bundle (minimum $5 to purchase) are:

If you pay at least the bonus price of just $15, you get all four of the regular titles, plus SIX more!

Take a look at The World SF Bundle

Here’s a few words from the man behind the Apex Book of World SF series himself, Lavie Tidhar.

Over ten years ago I came up with the crazy idea of an anthology collecting speculative fiction stories from around the world. The resultant collection – The Apex Book of World SF – came out in 2009 and has since spawned a series of books, with the fifth volume coming out later this year. Over the course of that decade I encountered some brilliant writers, and was able to watch what had once seemed impossible – overseas writers flourishing in the genre world – come to seem a matter of course.

While translation continues to pose a significant barrier, many new enthusiasts have contributed to surmounting the problem. In this bundle we have a comprehensive anthology of translated Spanish speculative fiction, Castles in Spain, as well as a wonderful novel from Japan, A Small Charred Face, made possible through the Haikasoru imprint dedicated to translated Japanese speculative fiction. In addition, we are offering all four of the current Apex Book of World SF anthologies, in which you may encounter many writers new to you, many of them translated from the original languages.

Yet another solution to the translation problem came with the emergence of new writers proficient in more than one language. Here, for instance, we have the wonderfully atmospheric Servant of the Underworld, the first novel by French author Aliette de Bodard, who writes in English. Russian author Ekaterina Sedia does the same, here with her debut novel The Secret History of Moscow, which is impossible not to devour. Malaysian Zen Cho’s debut collection, Spirits Abroad, justly won the Crawford Award, while fellow Malaysian Cassandra Khaw’s Rupert Wong: Cannibal Chef is a delightful, bloodied romp through a magical Kuala Lumpur.

I was lucky enough to write the original introduction to Mexican author Silvia Moreno-Garcia’s masterful Prime Meridian, a thought-provoking work of science fiction set in Mexico City, already garnering much attention. And I got to originally blurb South African author Nick Wood’s Azanian Bridges, an intriguing take on alternate history and Apartheid.

Our chosen charity for this bundle, English PEN, works tirelessly to promote translated works into English, championing literature beyond national and linguistic borders. They provide funding for translation projects, are the founding centre of a worldwide writers’ association with 145 centres in more than 100 countries, and are also a founding member of the Free Word Centre. They campaign to defend writers and readers in the UK and around the world whose human right to freedom of expression is at risk. I couldn’t think of a better partner for this bundle, and hope you help us support them and their work.

“World SF” as a term has been somewhat nebulous, encompassing a huge range of voices and approaches to the fantastic. Here is what I hope is but the first sampler of some of today’s exciting writers working in the field. I hope you enjoy them as much as I did.

The bundle is available only for a limited time via http://www.storybundle.com, so I recommend you take a look now.